The Pike fishing has begun to pick up of late on Barden Lake, with some good upper double figure fish being reported. Lure anglers have done well recently as the water has stayed clear and the weed has now died back which makes it easier to fish with sinking or floating lures. Lots of Jacks have been caught on the Lures, whereas deadbaits have produced the bigger fish. Steve Twort recently caught a nice 18lb 4oz fish, backed up by a low double figure fish. Society Chairman, Austin Battell has recorded the biggest fish so far, with a lovely plump, well conditioned 18lb 15oz specimen. This was caught on a large deadbait and backed up by 2 other fish to 8lb 9oz. The following day, Austin returned and had several dropped runs, follows and pull outs but did manage another 3 fish to 9lb on small deadbaits. 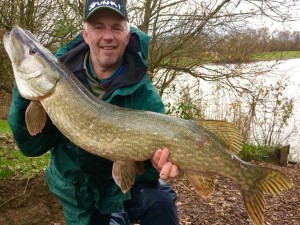